What muscles does running work?

Running is a complex, biomechanical action involving numerous muscle groups working in coordination with each other. The main muscle groups used are the quadriceps, gluteals, hamstrings and calf muscles. These work for forward propulsion, and additional many additional muscles, such as the hip flexors and core muscles for stability and swing through of the leg. These are just the direct muscles but we also use our arms to help with balance and momentum and our back and neck muscles for posture. You would have a hard job to find many muscles that do not play any role in running. We will now discuss the running gait cycle and each of the main muscles involved in more detail.

Phases of the Running Gait Cycle 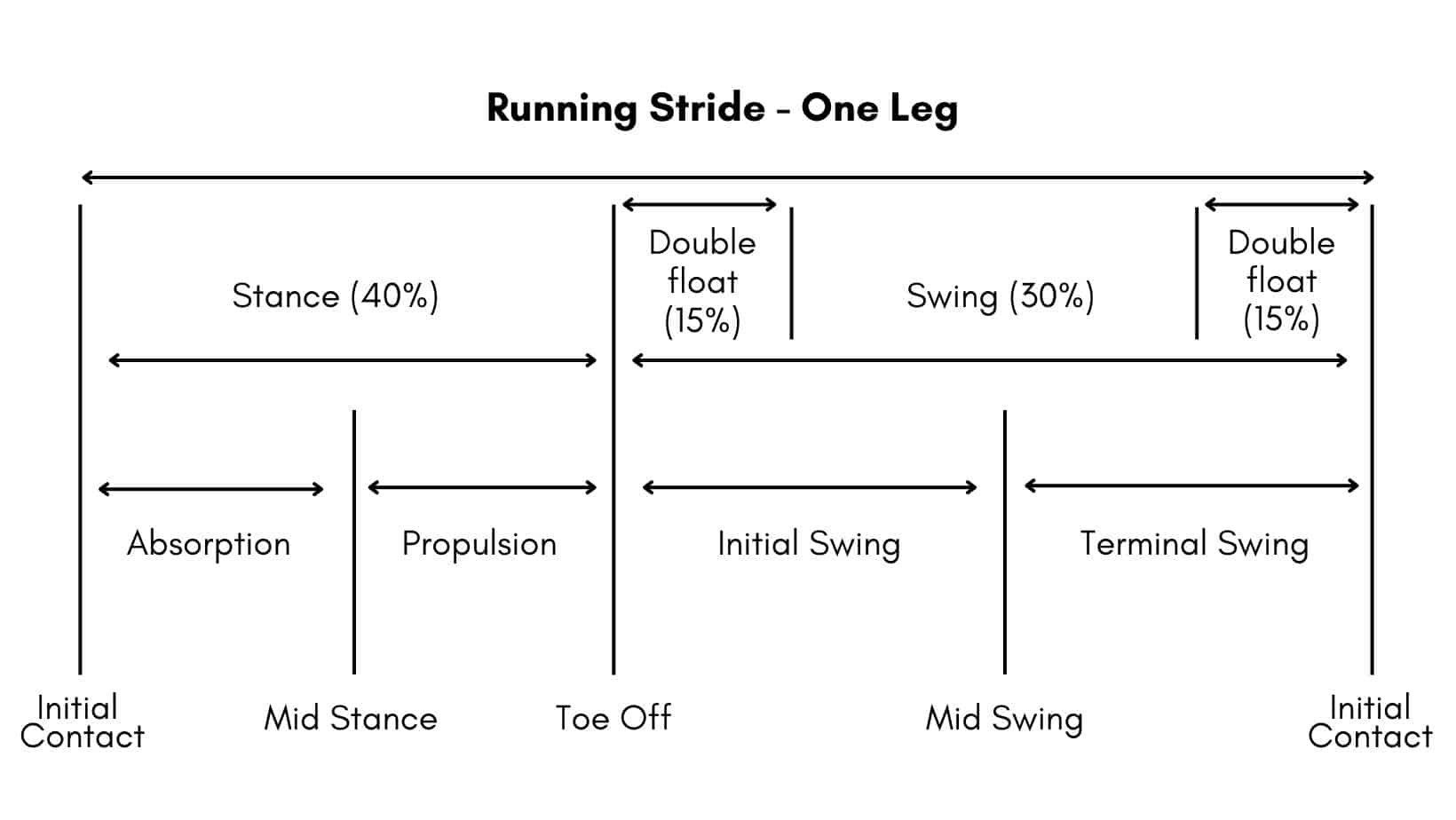 These phases can be further broken down, the stances phase has a two periods, one of absorption and one of propulsion, and the swing phase has the initial swing and the terminal swing.

This diagram shows the rough proportion of the running stride that is attributed to these phases. The proportions of time spend in each phase and muscle activity will vary significantly between runners, running styles, terrain, inclination and speeds. The faster the running speed the less time the runner has contact with the ground (Hamner and Delp, 2013).

What Muscles Does Running Work In The Stance Phase

The stance phase starts with the initial contact of the foot on the ground. This may be the heel, mid foot or forefoot, this can depend on the running style and the running speed. The initial part of the stance phase is absorption of the impact with the ground, therefore many of the muscles will be working eccentrically in this phase. That means they are lengthening as they contract, and this slows and controls the landing. The second phase is to propel the body forwards, and most of the muscles will be working concentrically. This means they are shortening as they contract, to move the joints to propel you forwards.

Stance phase accounts for about 25-45% of the running gait cycle, with a higher percentage for lower speeds.

One foot is always in contact with the ground.

Initial part is absorption of the impact with the ground, and second part is propulsion forwards off the ground. 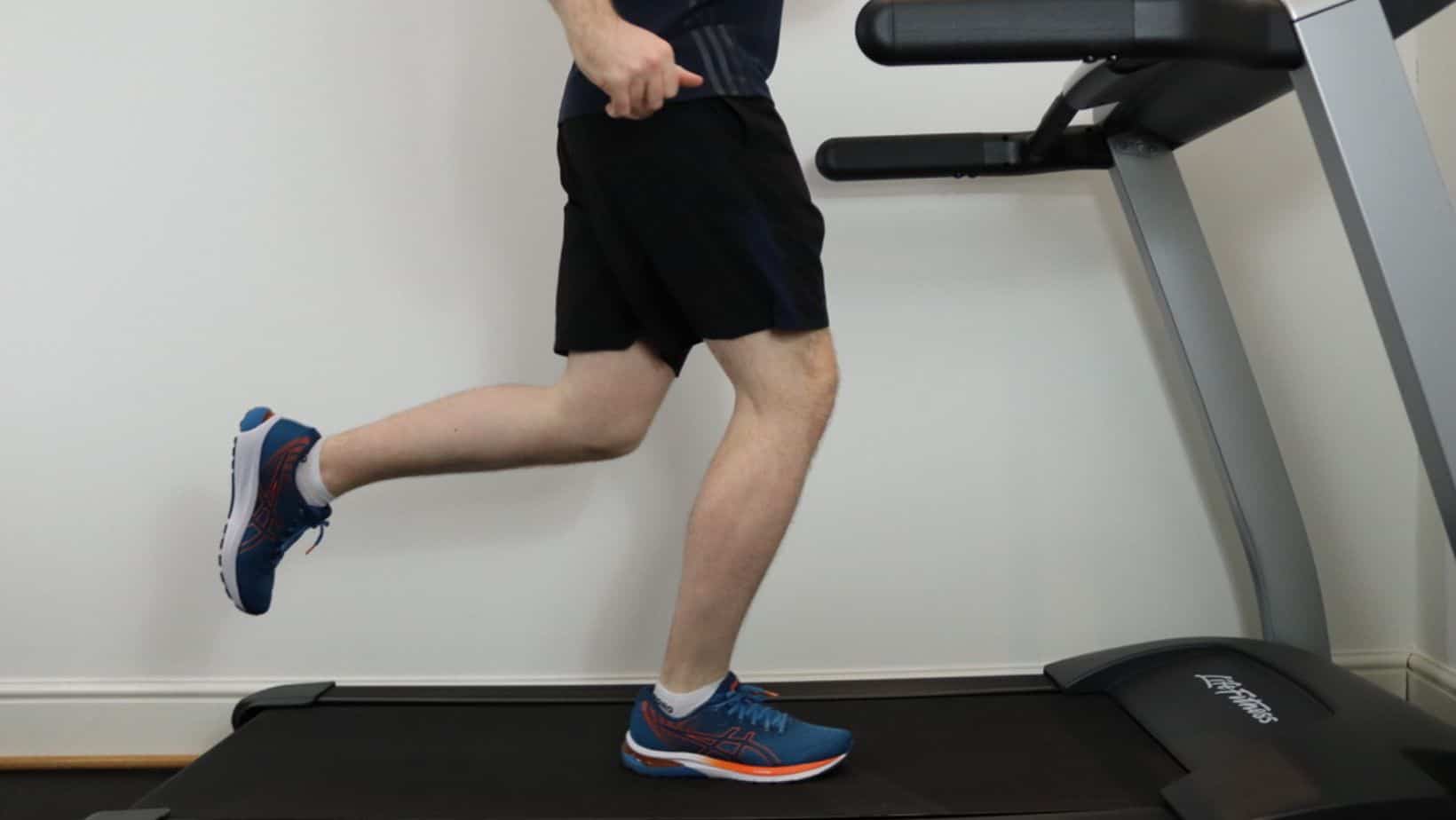 During the stance phase the quadriceps work powerfully to absorb the impact of landing and to keep the knee stable and prevent it bending excessively as weight is taken by the single leg. It is this powerful absorption of energy that can be responsible for the pain in the quadriceps muscles after running.

The hamstrings are engaged when the leg moves under and behind the body as the hip extends. They assist the largest of the gluteal muscles, the gluteus maximus with this action to create a powerful forward propulsion. Forward propulsion is also from the calf muscles of which there are two, the gastrocnemius and the soleus muscles. These two muscles work eccentrically as the foot makes initial contact, to absorb the impact, followed by concentrically as the body moves over the foot and they powerfully shorten to extend the foot and ankle down into the ground, propelling the body up and forwards. 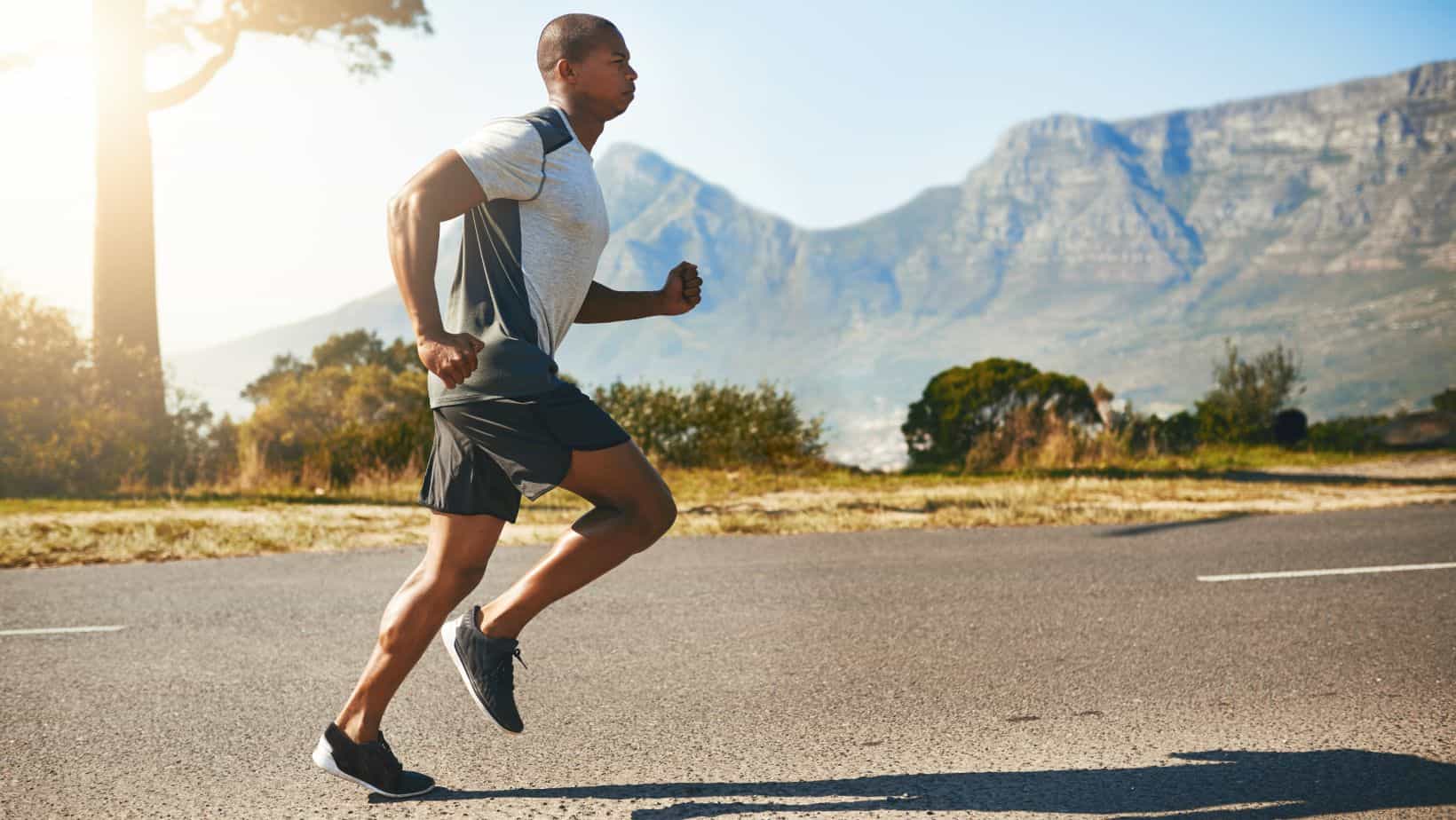 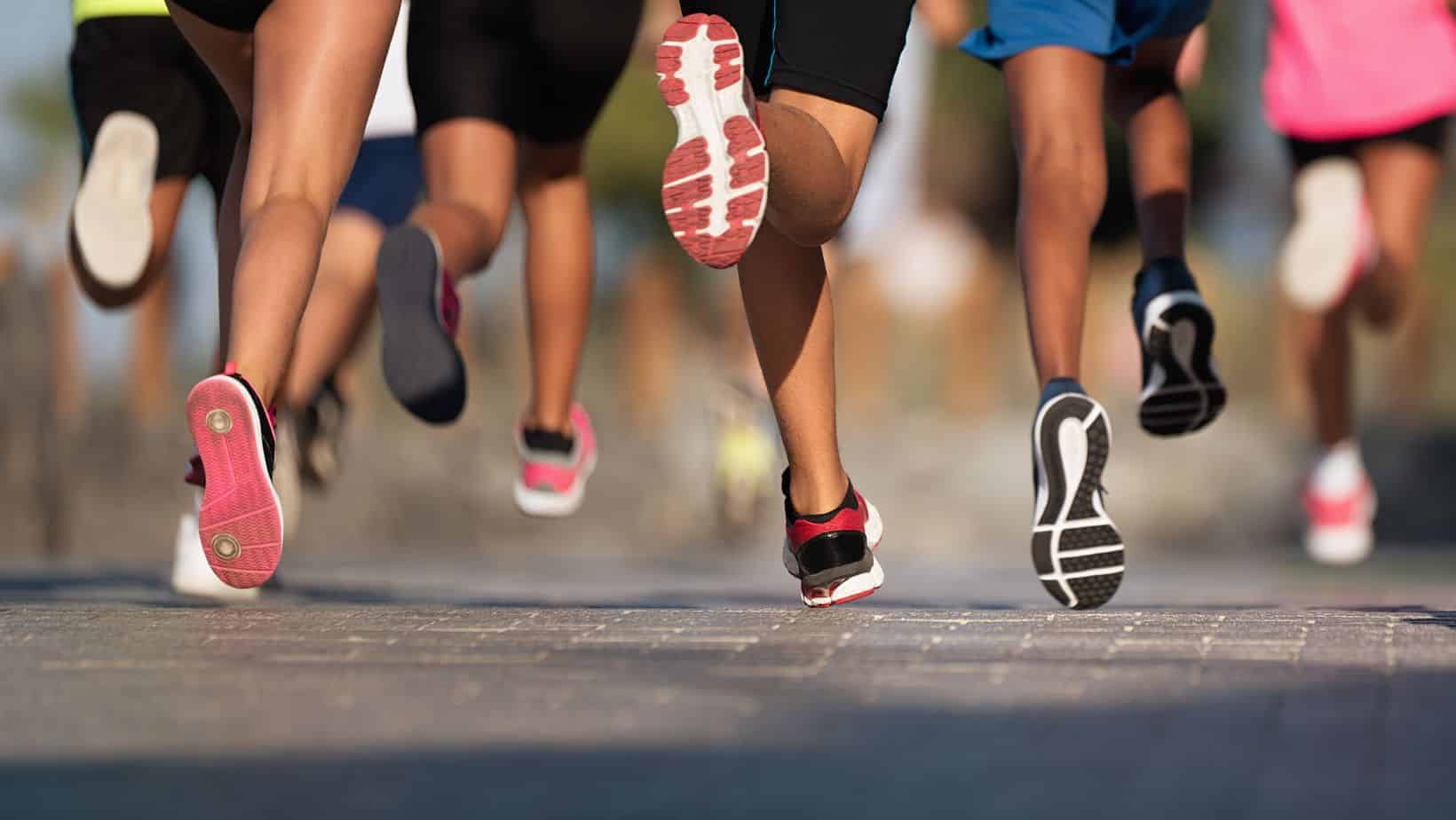 The tibialis posterior muscle can assist the calf muscles with these actions, but also plays a role, along with the peroneal muscles, in controlling the movement of the foot as it makes contact with the ground. The foot moves through from a slightly supinated position through pronation to propel off the big toe. The peroneals and tibialis posterior help to control this, ensuring the movement is not excessive, which can cause issues further up the leg. 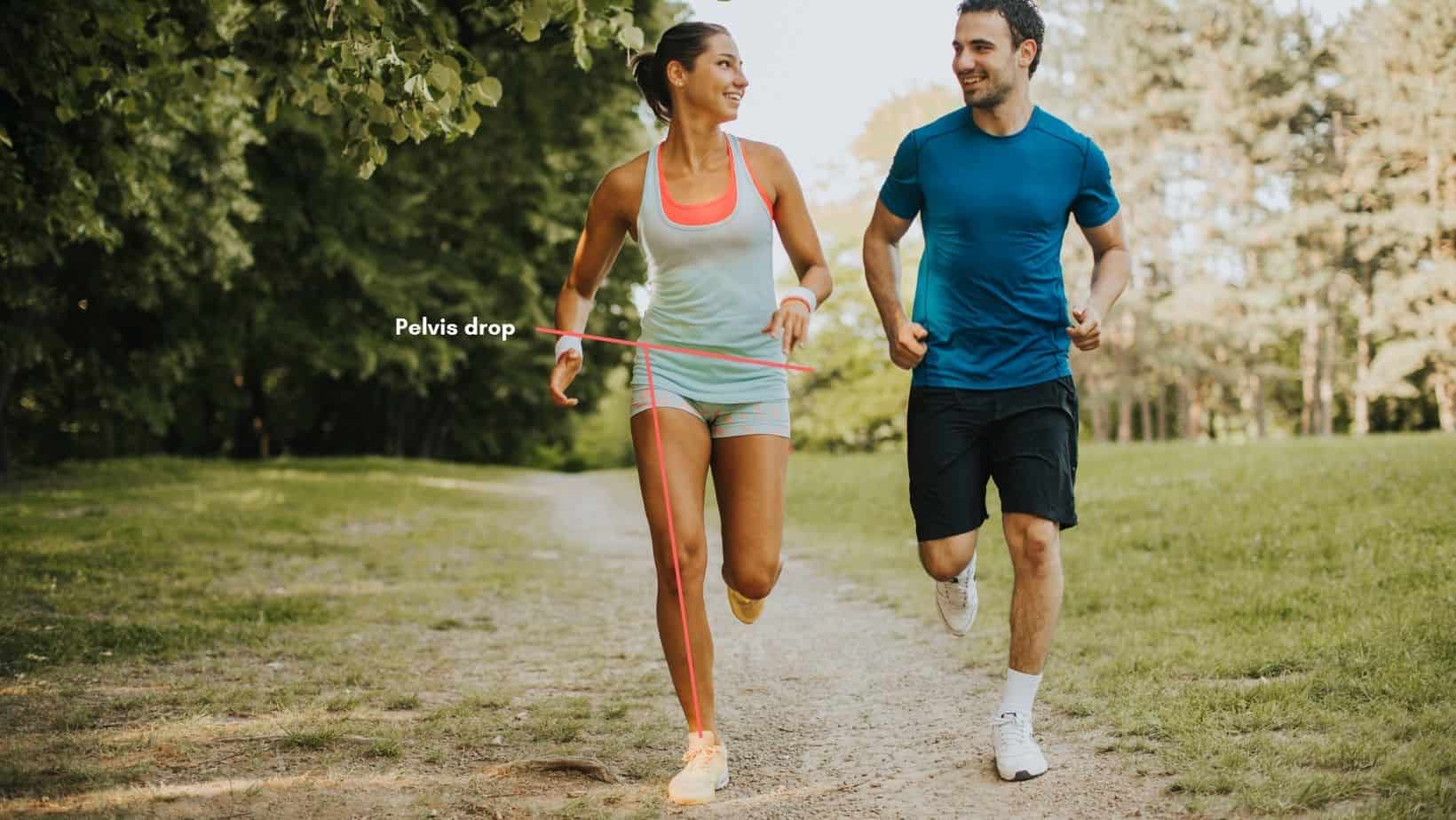 What Muscles Does Running Work In The Swing Phase

The swing phase is the recovery phase for the leg that has just propelled you forwards, it needs to float back, and be quickly swung forwards and into position to start another stance phase. This phase is less taxing on the muscles but still requires strength and power to be efficient.

The swing phase accounts for about 55-75% of the running gait cycle, with higher a percentage for higher speeds.

The foot is not in contact with the ground during this phase.

Includes ‘double float’ at the beginning and end of the phase, when neither foot is in contact with the ground. 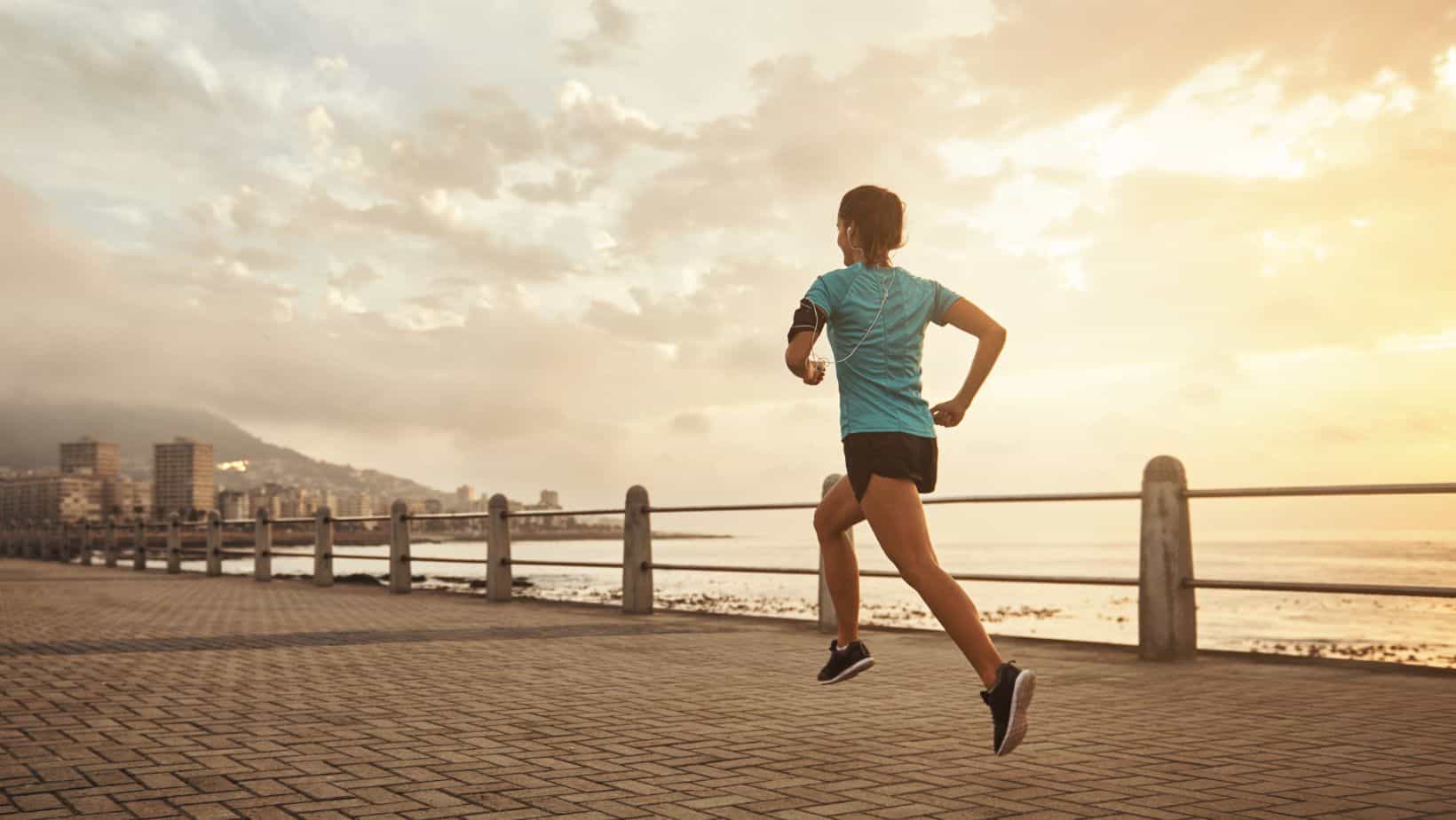 The quadriceps muscle group attaches over the hip and knee joints, it is a powerful knee extensor, straightening the knee, and also has an action over the hip to flex it forwards. The more powerful muscles for flexing the hip forwards are the two other hip flexors, the psoas and iliacus muscles that attach to the spine and the pelvis respectively, and inert into the front of the femur. During the swing phase the quadriceps assist these two muscles to swing the leg forwards from the hip. The quadriceps also straighten the knee to position the lower leg for landing.

The tibialis anterior muscle is another important muscle to position the foot and ankle for landing. It is located at the front of our lower leg, on the outside of our shin bone, its main role is to lift the foot by flexing the ankle, this ensures the toes clear the ground and positions the foot for landing. The hamstring muscles help to make the swing phase more efficient by bending the knee so there is shorter lever to swing through, and so that the foot is clear from the ground. 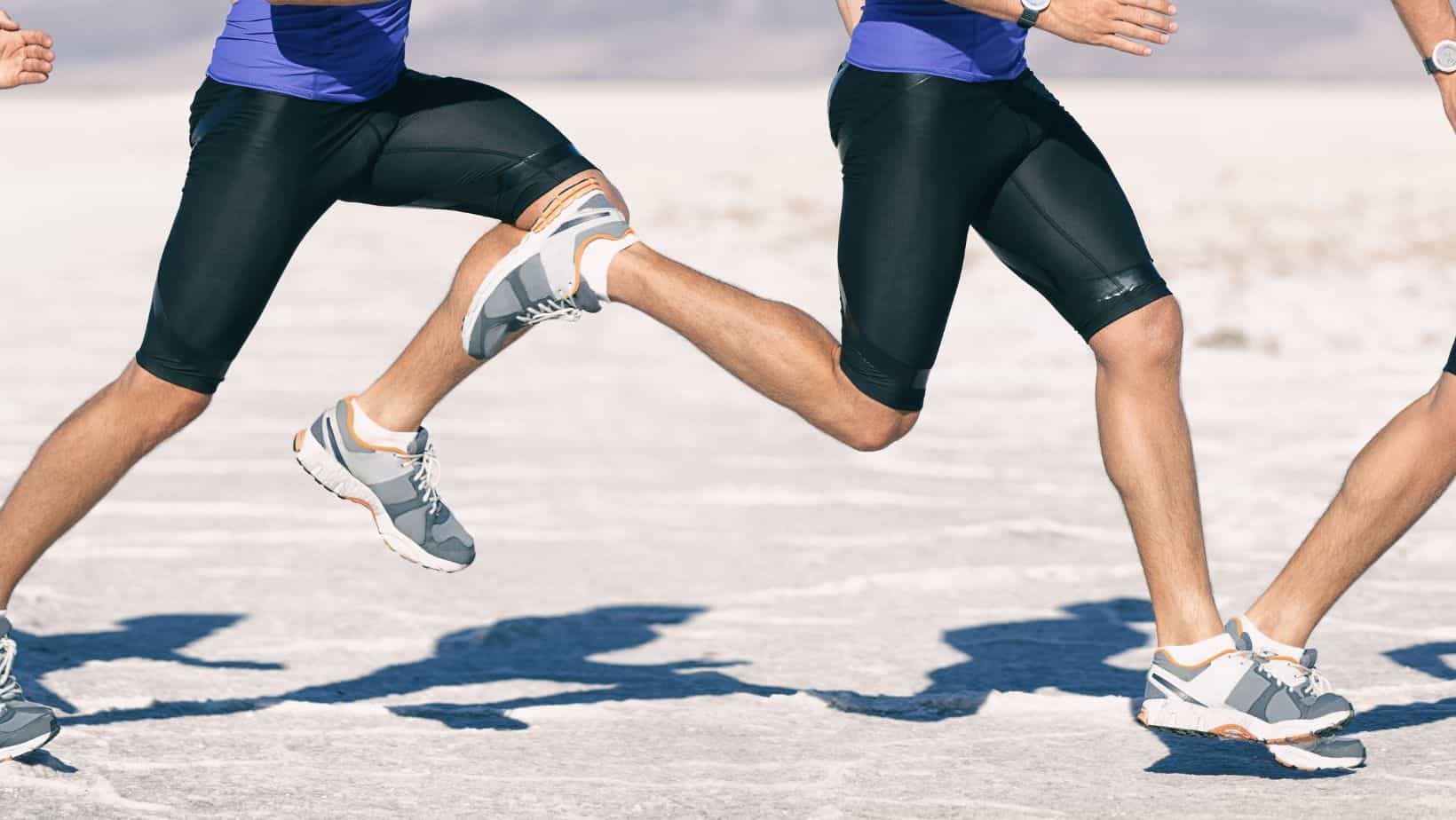 The gait cycle is far more complicated that this brief description as there are further actions from muscles throughout the whole body to help stabilise, absorb energy or propel us forwards. This article has only focused on the basics of the action of the muscles of the legs to give you an understanding of the lower limb biomechanics of running and to gain an understanding of what muscles running works.