Anatomy of the Pes Anserine

The pes anserine is the combined insertion point of 3 tendons on the top and inside of the shin bone, just below the knee. The term is Latin for ‘goose foot’, named because of its appearance. The 3 tendons that form the pes anserine are the sartorius, gracilis and semitendinosus (one of the hamstrings). These muscles have different actions: to flex the hip, abduction the hip, adduct the hip, external rotation of the hip, and flexion of the knee. Due to this combination of movement, this area has multiple directions of forces acting on it. This therefore presents a greater risk of overload and irritation at the insertion of the tendons. The pes anserine bursa sits between the tendons and the bone underneath to protect their soft tissue from compression and friction against the hard bone with movement.

Muscles of the Pes Anserine 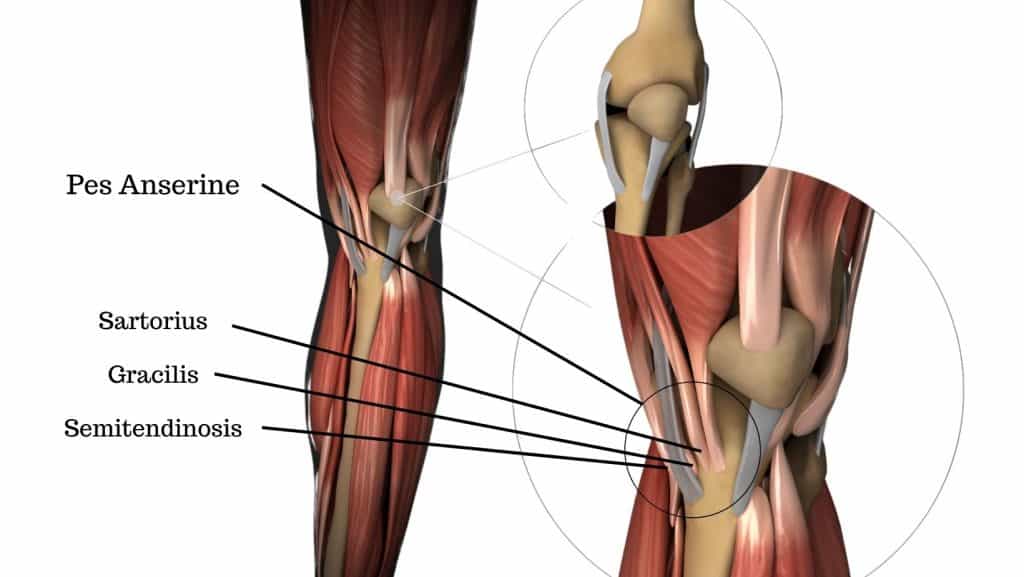 What is the Function of the Pes Anserine Bursa?

A bursa is a thin membrane sack, similar to a deflated balloon. It has a small amount of fluid in it to provide lubrication so it can slide easily to relieve friction between moving parts. We have more than 150 bursa around our body for this important protective function. With enough repeated friction or compression, or with a forceful direct impact, these structures can become inflamed. When inflamed they gain additional fluid inside, making it larger or appear swollen, and very sensitive. This is a mechanism that encourages us to avoid further compression or friction, that might damage functional structures such as the tendons, because it will hurt.

Due to the anatomy in this area strain and overload may affect the tendons or the bursa. This can result in either pes anserine bursitis or pes anserine tendonitis. The location pain will be felt on the inside of the knee, usually at or just below the joint on the inside of the shin bone. Medial joint line pain is the most common symptom reported with pes anserine bursitis (Rennie & Seifuddin 2005). Due to the inflammation, the skin in this area might be red and feel hot to the touch. It can also appear as a swollen lump in this area. Depending on the cause, the pain will usually develop gradually over time, with a repeated overload or will start suddenly, if the injury is related to trauma or direct impact. Pain is sometimes described as an ache with occasional worse and more intense pain with specific movements that stress the bursa. It may feel sore, hot or like a burning pain. In most cases, it will develop on one knee, but it is occasionally present bilaterally, in both knees. 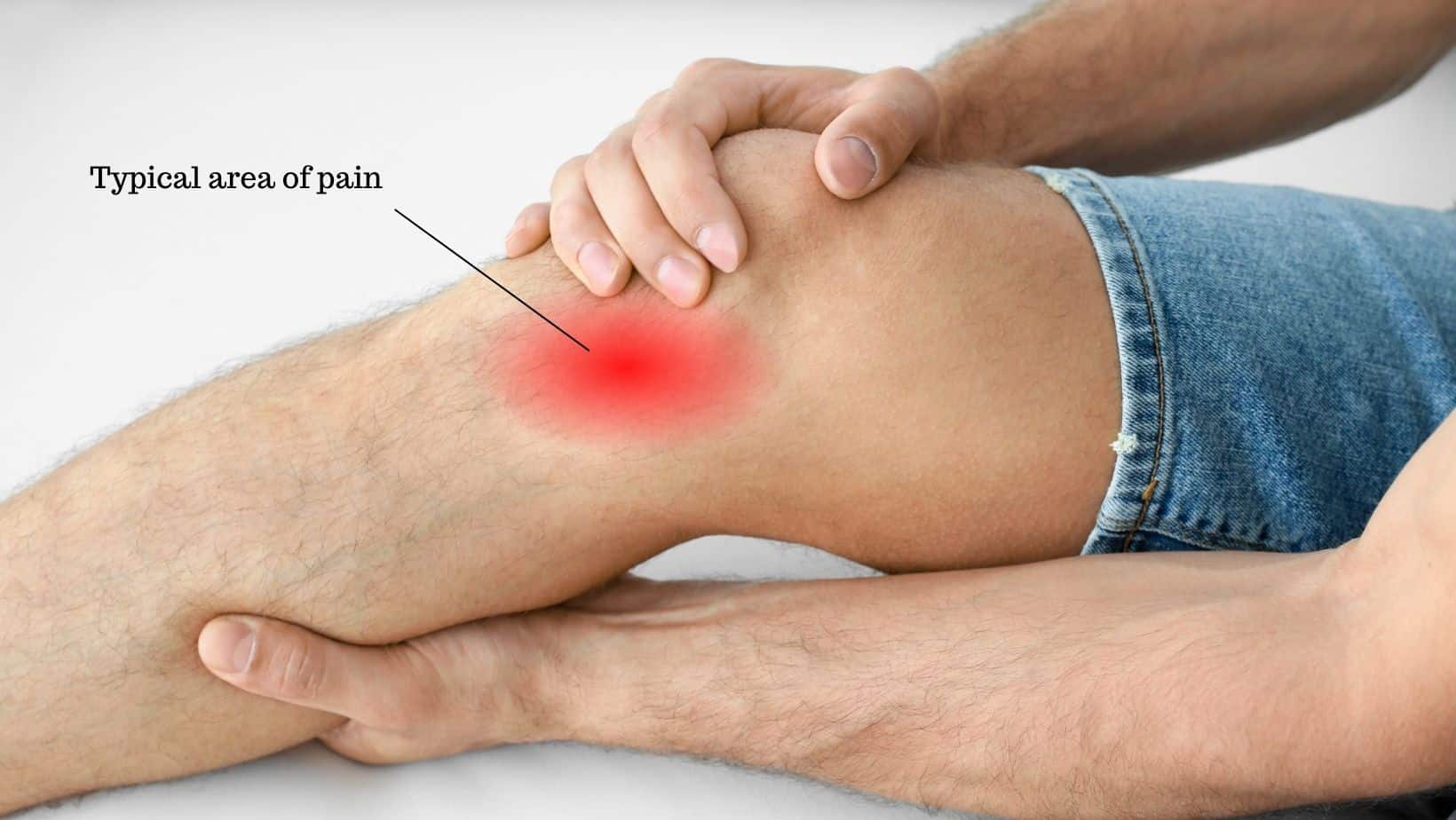 Pain may get aggravated during exercise and may continue to worsen after, and commonly takes a long time to settle down. This could mean hours to days for it to return to its pre activity pain level.

Some static postures such as side lying can be an issue if there is pressure on the inside of the knee. Therefore sleep can be disturbed if this position is adopted. If you normally sleep on your side, a pillow between your knees can make it much more comfortable.

There are two main forms of Pes anserine bursitis. Traumatic or acute, from an impact or specific injury, and chronic from repeated overload. With a traumatic or acute onset this is usually from a direct impact, such as a fall or collision. If the biomechanics of the individual do not put them at higher risk of pes anserine then it can be a much quicker recovery than from a chronic cause.

Pes anserine bursitis is also very common in runners, as running is a high impact sport. Running therefore requires a high level of strength and muscle control to prevent inward movement of the knee. As running is a highly repetitive sport, if this strength or control is insufficient then the runner will be as a high risk of pes anserine bursitis, as well as other injuries of the medial knee. This is due to the repeated small overload to these structures. Most commonly it is an overuse injury, that will develop when there is an increase or change of activity, such as taking up running or increasing running volume. 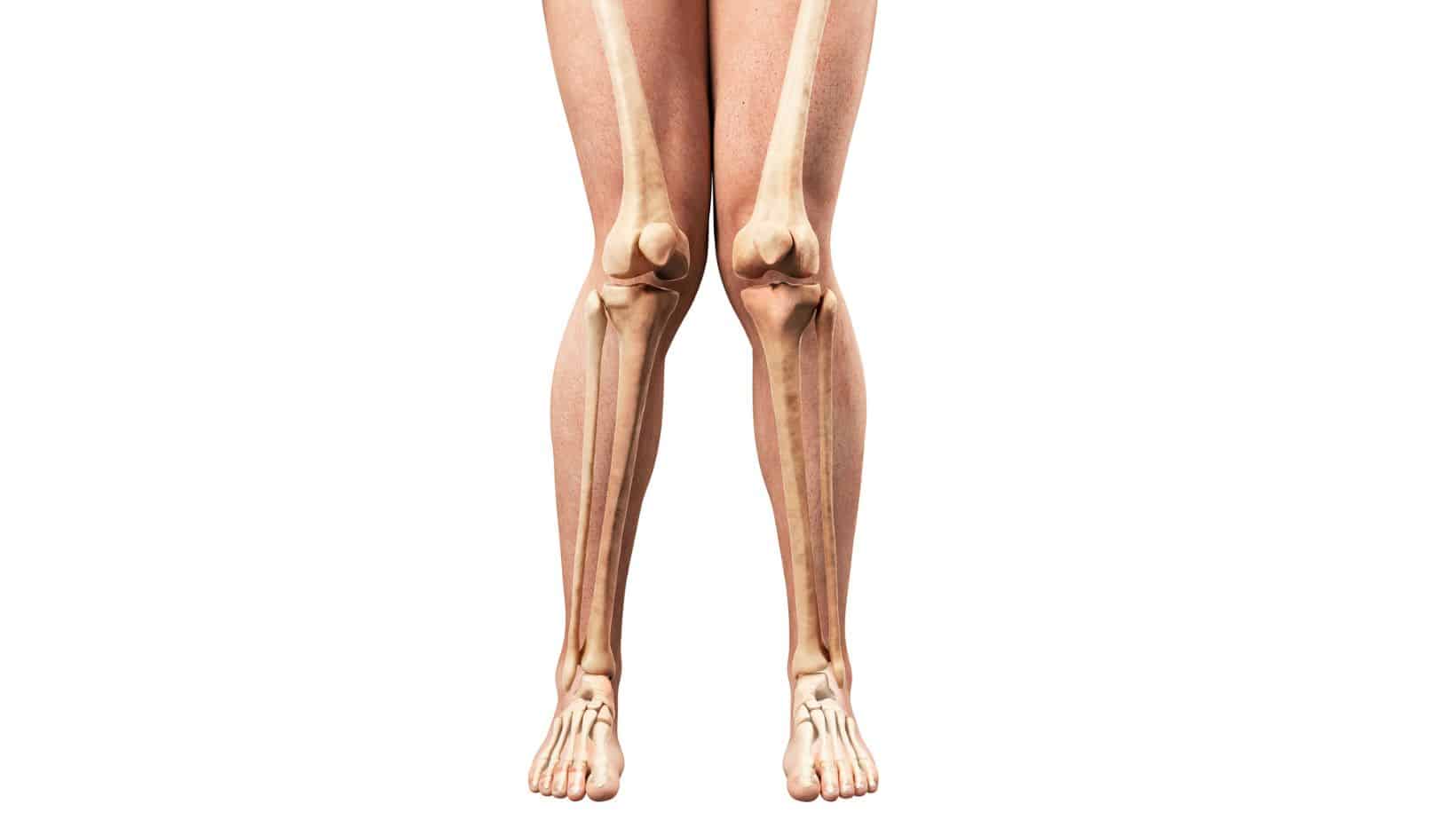 Like with most musculoskeletal pain, a diagnosis is made from a combination of several factors. The history of the onset of pain, history of activity and any recent changes to activity or lifestyle, and a physical examination to rule in or out different diagnoses. Pes anserine often gradually develops over a period of time, it can be linked with an increase of a particular exercise such as running, or a change in the exercise that might put more pressure on the structure, such as hill running or on uneven ground. It can also be something seemingly minor like a change of footwear.

Part of the clinical examination will be to feel the area of pain. It will be sore to put pressure on the bursa, and to resist the action or stretch of the three muscles that insert together and form the pes anserine. Assessing the individuals gait may also reveal important information as to the cause and also potential treatment of this issue. If the person has excessive inward movement of their knee it will be important to address this with corrective exercises or footwear. In some cases the use of orthotics to help improve foot posture can be very effective. Clinical tests to rule out other causes of pain at the inside of the knee such as the meniscus, collateral ligaments and nerve are helpful to confirm the diagnosis.

While there is no specific pes anserine bursitis test, radiolgy can be used to confirm a clinic diagnosis. MRI is the best form of imaging to get an accurate diagnosis.

Other causes of medial knee pain include medial meniscal tear or irritation, medial collateral ligament injury, medial patella femoral joint pain or nerve pain related to the saphenous branch of the femoral nerve. It is therefor, important to have an assessment with a medical professional such as a physical therapist to diagnose your pain and get you started on the most effective course of treatment.