What are the symptoms of an IT band injury?

Iliotibial band syndrome is a painful condition relating to the connective tissue band that runs on the outside of the leg. This syndrome, for most people, presents with knee pain, on the outside of the knee. It can affect one side only, or both knees. Some people will feel hip pain, thigh or quad pain, and sometimes shin pain. Below you will see the detailed anatomy of the iliotibial band and it can cause pain at any of the many points of attachment.

The most common site of pain is at the lateral epicondyle of the femur. Because the IT band moves over this bony prominence when the knee is bent through 20-30º. It is also, therefore, at this angle of knee bend that most knee symptoms are felt. Unfortunately, we move our knees through this range when walking, running, and sometime when cycling or driving so this condition can be very debilitating. Many people find the pain so high they are unable to run through it, and in extreme cases can’t walk without aggravating it.

The pain felt, is usually described as a dull ache, and when IT band syndrome is getting worse, the pain might become sharp or burning. Some people describe it as a nerve pain on the outside of the knee. As well as certain activities, there are positions that aggravate it, such as lying on your side. Some people have night pain, or feel it while sleeping. 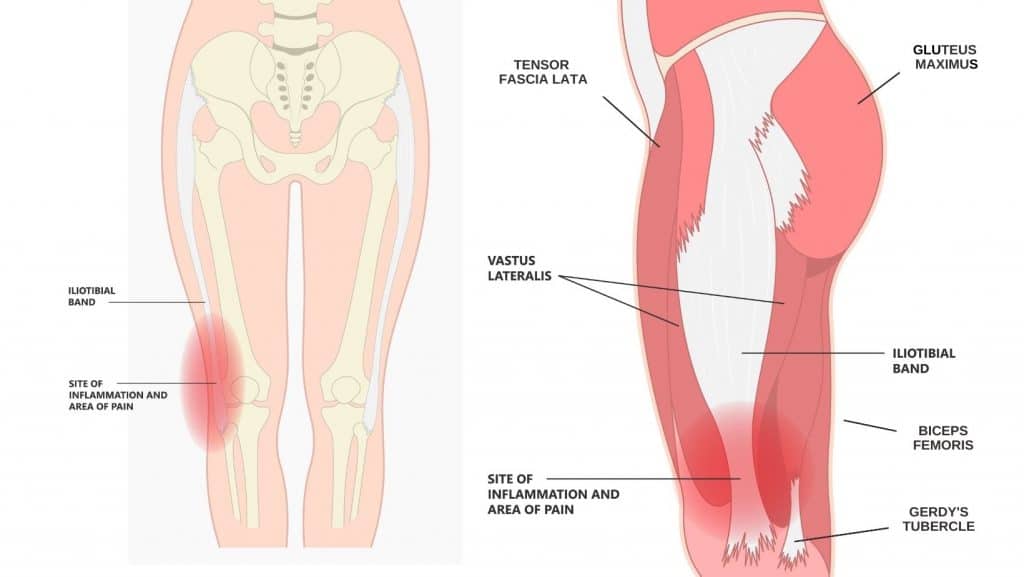 The primary function of the iliotibial band is to stabilise the pelvis and for the control of posture. It does this by assisting with hip extension, abduction, and external rotation.

More can be learnt about the functional anatomy of the iliotibial band in this paper (Fairclough et al. 2006).

An additional role that is more recently discussed is the mechanosensory role. Like a ligament, when the IT band is under tension there is feedback of this to our brain via receptors. Therefore it can help us with the coordination of movement as it offers some sensory feedback.

There are some specific biomechanics that can increase the risk of this injury such as flat feet, poor hip or knee control, or hypermobility. Special tests or diagnostic tests can put the IT band under tension and compress the sensitive area. Two such tests is the Ober’s test and Noble’s Compression test. These are done frequently by a therapist, taking the leg into a position to stretch the IT band and apply additional compression to the outside of the knee over the lateral epicondyle, described in more detail in the full paper (Noble, 1979). Pain on stretch or application of compression represents a positive test.

Confirmation of a clinical diagnosis can come from radiology investigations. MRI scans and ultrasound imaging are two accurate and effective ways to do this. Both MRI and ultrasound findings will show inflammation or swelling of the iliotibial band and underlying fat pad. X-ray is not sensitive for this condition and will not show valuable information. 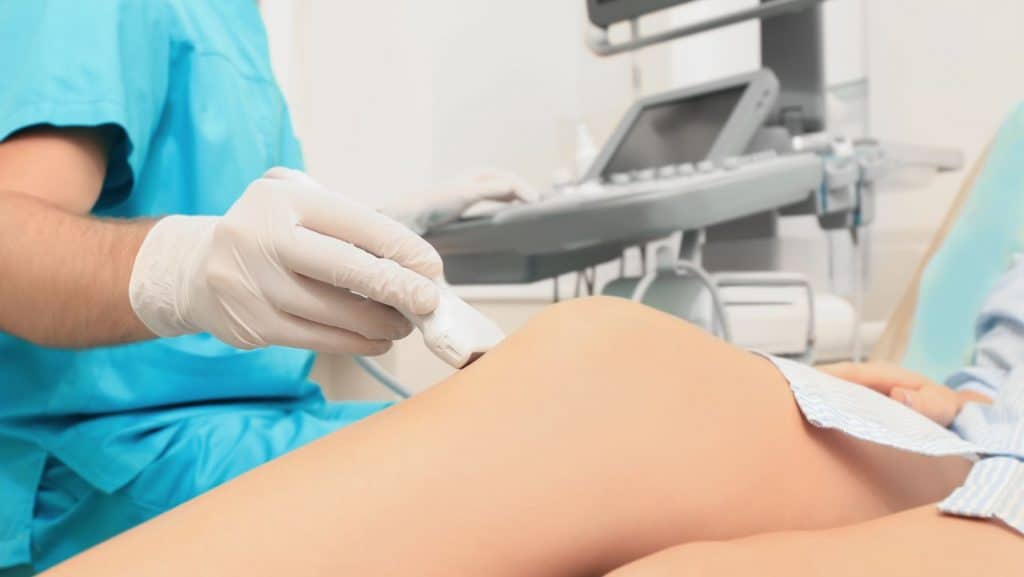 There are other conditions that can present similarly to IT band pain. Trochanteric bursitis, pes anserine, or meniscus tear. Therefore it is important to have an assessment with an experienced clinician to get the correct evaluation and management plan.

Iliotibial band syndrome is caused by repeated compression of the iliotibial band and underlying fat pad, most commonly at the knee but also at the hip. Therefore there are some sports and activities that are more at risk. 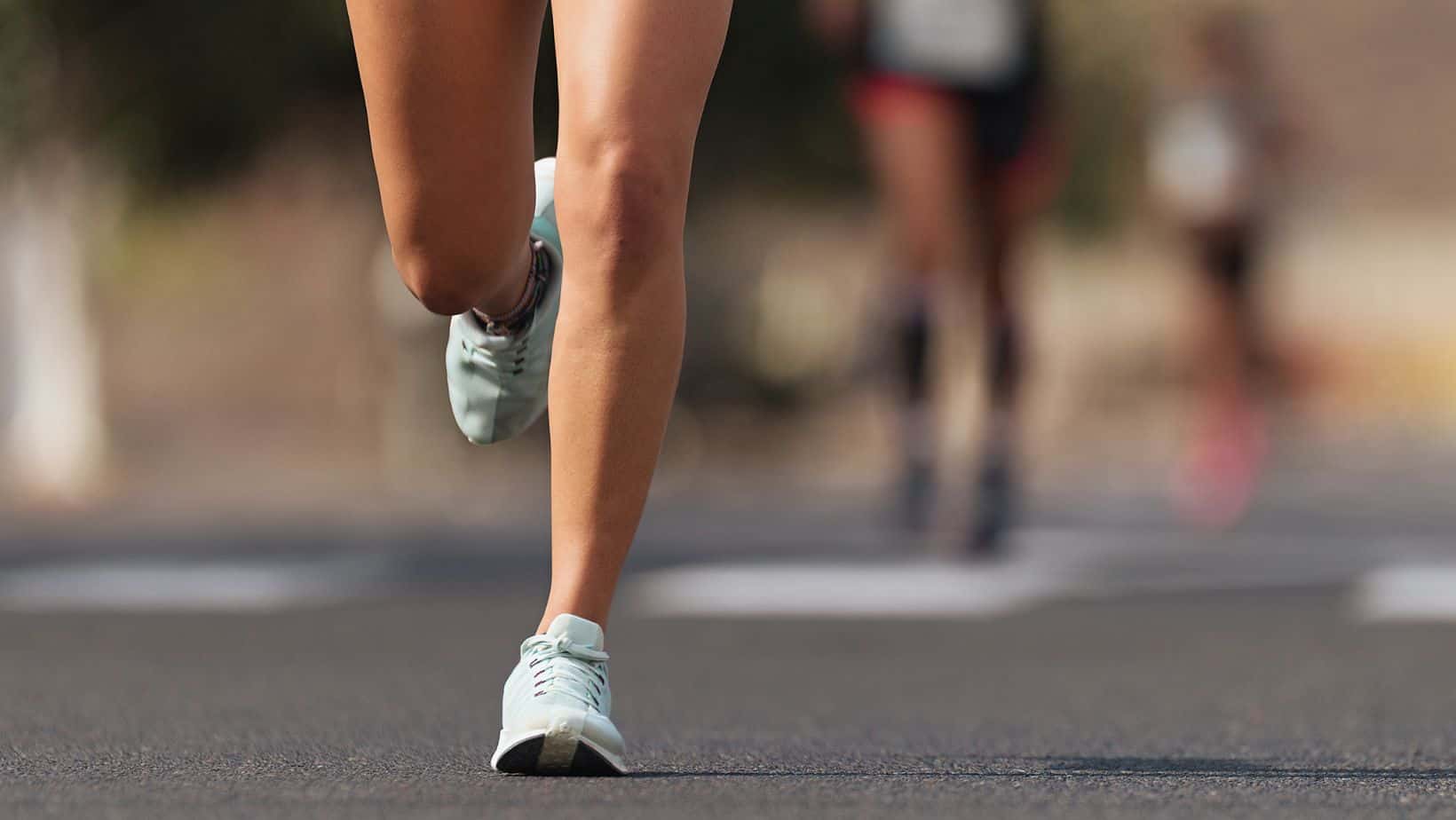 ITB syndrome is common in runners, especially as individuals transition up in distance. Marathon training is a common cause of IT band pain as manly people underestimate the time needed to condition their bodies. Common training errors are, increasing running distance, frequency or speed too quickly, or a sudden change of terrain such as running on narrow paths or changing the style and support of shoes. With running the biomechanics of your movement will also affect your risk level for ITB pain. A greater angle of adduction and/or internal rotation at the hip, which can result in a narrow running gait, where your feet or knees cross over will increase the tension and compression of the IT band, (Noehren et al, 2007). Similarly, if there is poor strength and control around the hip and pelvis.

Read about the best IT Band Syndrome Exercises.

Iliotibial Band Syndrome and Other Sports

If you are not a runner you can still develop IT band syndrome. Other sports that are regularly related to this injury are cycling, long-distance walking, and sometimes golf. In these sports, there is still a significant repetition of bending of the knee through the provocative range of 20-30º of knee bend, irritating the structures on the outside of the knee. 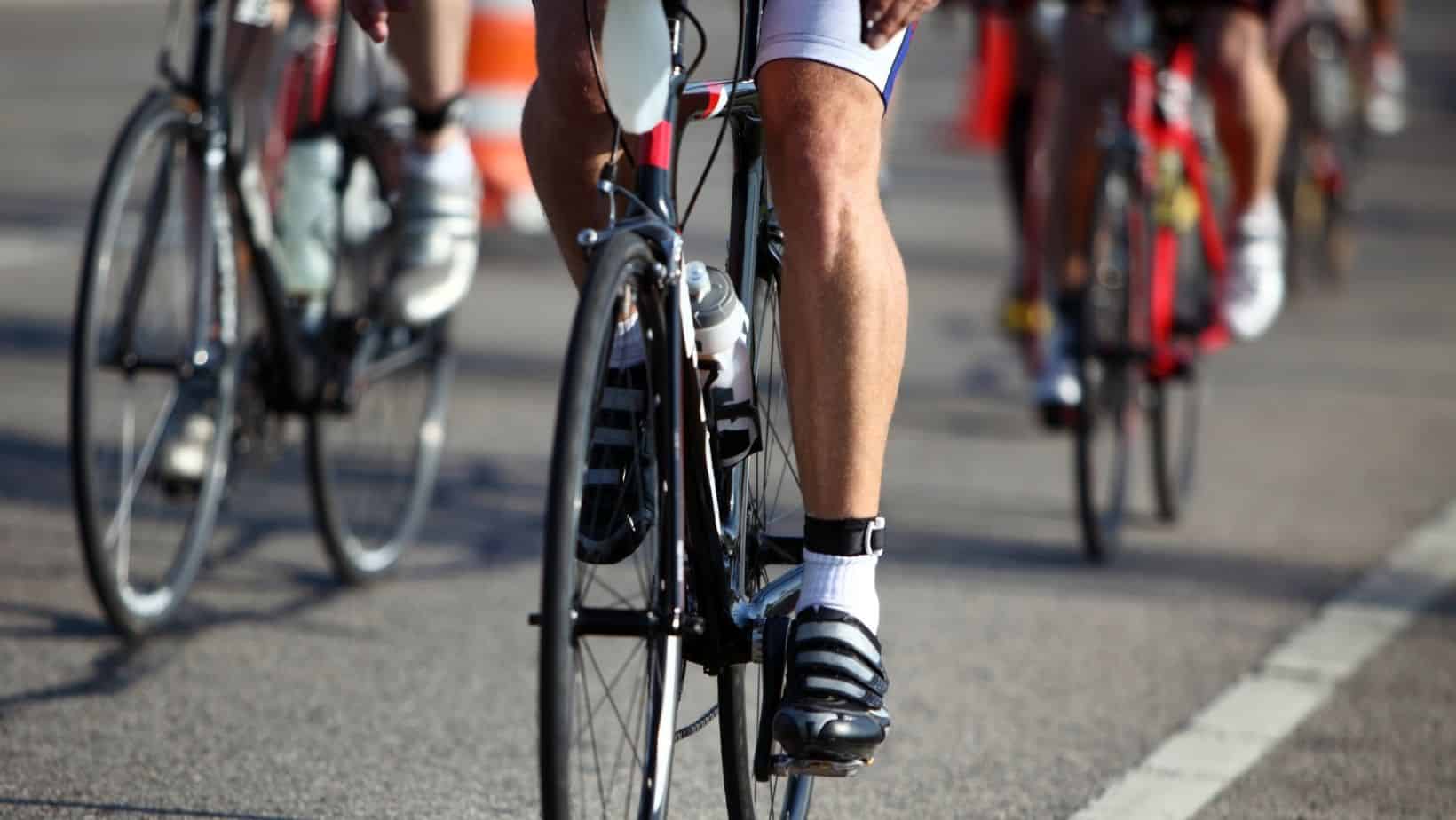 Outside of sport, ITB syndrome can develop due to being overweight or obese. The additional weight on the joints accompanied by the often poor conditioning or weakness put this group at risk. Similarly during pregnancy, due to the increase in laxity of the ligaments as a result of hormone changes, and increased weight. The reduction of strength in the elderly puts them at a greater risk also. After knee or hip replacement, the reduction of strength, as well as the change of biomechanics, can also trigger the onset the knee pain or hip pain of ITB syndrome.

This is not medical advice and we recommend a consultation with a medical professional such as James McCormack to achieve a diagnosis. He offers Online Physiotherapy Appointments for £45.

How Do You Fix Iliotibial Band Syndrome?

How Do You Fix Iliotibial Band Syndrome?